Zhanjiang is one of 15 cities in the southern province economic zone of mainland China, and is close to Hong Kong situated in the delta of the Pearl River system. Zhanjiang is the major southern port and is west of the region's capital, Guangzhou (Canton) in Guangdong region. The peninsula city is the focus of a large mining and mineral exploration region as well as the port gateway to some of the largest agricultural producing areas in Southern China. China has 34 regions of which the Guangdong covers a staggering 180,000 square kilometres.

Zhanjiang is one of the four major sugarcane yielding centres in China, with its sugar output reaching 1.2 million tons in 2006. In addition, Zhanjiang grows amount of eucalypt, sisal and mangrove in China. Twenty-one manufacturing bases for 5 categories of agricultural products have been built here.

Important links have been established focussing on reciprocal visits and exchanges in education, technical engineering, arts and culture. The 37-hectare Sino Australia Friendship Garden in Zhanjiang opened in 2007 and features many species of exotic flora native to Cairns and the Tropical North.

Zhanjiang lies in the southwest of Guangdong Province. It is situated in Leizhou Peninsula, neighbouring the South Sea in the east and Beibu Gulf in the west. The city is separated from Hainan Province by Qiongzhou Strait. Most of the land of Zhanjiang City is peninsula or islands. The terrain slopes downward from the north to the south. A plain forms the major area of the city. Its mountainous area is in the northern part of the city.

The population of Zhanjiang is approximately 7 million (2010).

The local time of Zhanjiang is Greenwich Mean Time (GMT) +8 which is two hours behind Cairns.

The agreement with Zhanjiang was signed on 25 August 2004.

'In accordance with the Principles governing the establishment of the diplomatic relations between Australia and the People's Republic of China, Cairns City and Zhanjiang City, referred to as the two parties, hereby agree, after friendly discussions, to establish Sister City Relationship, in an effect to increase understanding and friendship and strengthen friendly cooperation: 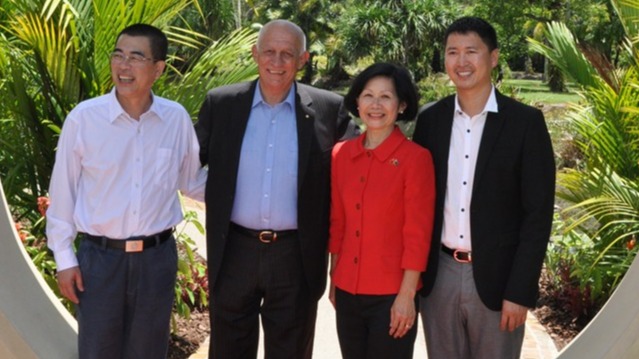 The Zhanjiang Friendship Garden was officially opened on 21 November 2015, celebrating the Sister Cities relationship between Cairns and Zhanjiang.

The Zhanjiang Friendship Garden is situated on the banks of Freshwater Lake, within the Centenary Lakes precinct at Edge Hill.

It incorporates traditional features in a contemporary style. The entry pillars announce “arrival” and are adorned with graphic motifs of traditional cloud patters of Zhanjiang. Boulders of Chillagoe marble acknowledge the importance of rocks and mountains in Chinese garden culture.

A Moon Gate is inscribed with the words “Friendship Garden” and carved granite dogs at the entrance to the Pavilion are representative of the ancient dog sculptures unique to Zhanjiang.